Hey folks, as is probably obvious, I haven't posted here regularly in a while, but you can still find me on the interwebs:

THE 100 Live+3 Tweeting: "Contents Under Pressure"

"Contents Under Pressure," the first of the two episodes I co-wrote this season on THE 100, aired on April 30. It was live-tweeted by a number of our fantastic cast and producers, but I did want to share some tidbits of my own.

Akela Cooper was my wonderful writing partner-in-crime on this episode, and she tweeted some cool behind the scenes photos if you want to scroll back through her Twitter timeline.

(Missed the ep or want to rewatch as you read? You can watch it online for a couple more weeks -- the CW streams the most recent five episodes)

Massive thanks and congrats to our cast, crew, post team, and director John Showalter for their hard and excellent work on "Contents Under Pressure."
Posted by Kira Snyder at 2:05 PM 1 comment:

Cool stories, great cause! EMPOWER: FIGHT LIKE A GIRL, a short story anthology celebrating female badassery, is now available on Amazon for just $4.99 -- all proceeds will go to the Lupus Foundation of America.

I'm honored to be included in such illustrious company. Please help us support this important research to end an awful disease. 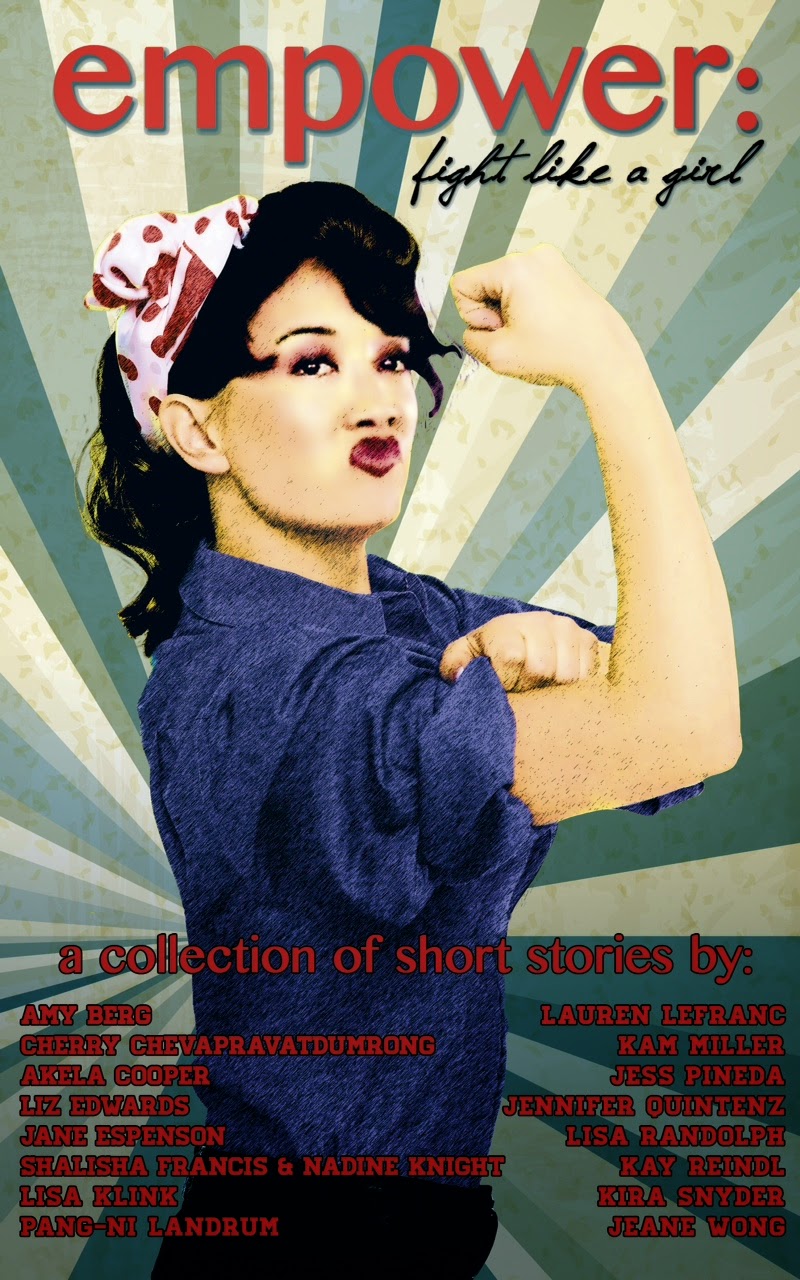 Click here to pick up your own copy of the newest Parish Mail interactive YA supernatural adventure, available on digital platforms including Kindle, Nook, and iBooks.

It's Christmas in New Orleans! Magic, romance, and holiday spirit -- of the ghostly variety -- are in the air as you help Celia race to solve a paranormal mystery before Christmas Day.

Starting this week, Season's Greetings will be making a grand tour of the blogosphere courtesy of some of the best book bloggers on the internet:


There's more... to celebrate the book's launch, we're holding another fantastic giveaway. Enter below for your chance to win your very own copy of Season's Greetings as well as the one-of-a-kind Grand Prize: this gorgeous handmade necklace inspired by Parish Mail's bonewood tree! This is the mailbox tree where Celia finds the antique letters, re-imagined here in silver-filled wire and Swarovski crystal garnet beads.

(The necklace was made by my good friend Amanda. She has a cameo in Season's Greetings but is a real person -- you can see more of her beautiful jewelry at her Etsy store.)

Enter the giveaway via the Rafflecopter widget below. Good luck!
a Rafflecopter giveaway
Deck the halls and ring those jingle bells, Christmas is here! I hope you enjoy reading this festive holiday story as much as I enjoyed writing it. Tip: Season's Greetings goes great with a cup of cocoa and a cozy fire…

Season's Greetings: The Cover Revealed! And a Giveaway, Too!


I LOVE the vintage Christmas card that the folks at Coliloquy found. It's warm and festive but also a little creepy. Why are there no people in the room? Where did they go? Hmm...

And I think it's so cool how the red ribbon ties in with the bloody covers of Dead Letter Office and Post Mortem while being more fitted to the murder-free story. Don't worry, though: while the mayhem may be taking a vacation in Season's Greetings, Celia finds plenty of supernatural chills and magical thrills in holiday-time New Orleans. Not to mention romance...

To celebrate the cover reveal, Coliloquy is getting into the holiday spirit early, giving away Amazon gift cards and Parish Mail book bundles! Enter below for your chance to win.

a Rafflecopter giveaway
Posted by Kira Snyder at 8:00 AM No comments:

Christmas Is Coming... In November

And what would the holidays be without presents? Here are some of the goodies in store for you:

Plus, here's a stocking stuffer to tide you over, the OFFICIAL synopsis of Season's Greetings, hot off the press (well, the Coliloquy website):

Celia Macarty is eager to enjoy her first New Orleans Christmas, but school has barely let out for the holidays when she learns that mystery never takes a vacation. Using the clues on a Christmas card from 1933, Celia must unravel a supernatural riddle that takes her all over festive New Orleans—and deeper into her family’s past. As Christmas Eve draws closer, shameful community secrets come to light, and Celia enlists an unlikely ally to set things right.

With the help of her witchy best friend Tilly and a trio of to-die-for suitors, Celia navigates a mystery and, in the process, her heart. Because in the Crescent City, Christmas is a time of enchantment and surprises, and a little romance might be Celia’s best present of all.

Don't forget, you can dive into the Parish Mail series with Season's Greetings, or catch up with Books 1 and 2,  Dead Letter Office and Post Mortem (you have time!)
Posted by Kira Snyder at 7:09 PM No comments:


We're looking for a few good elves to help get the word out about PMX, aka Parish Mail: Season's Greetings, teen detective Celia Macarty's latest adventure in supernatural New Orleans.  This special new Christmas mystery in the Parish Mail universe is coming out soon, and you can help spread the news as a member of the Parish Mail Street Team!

Parish Mail Street Team members will get some nifty perks from my publisher, Coliloquy:

To join, just email parishmail@coliloquy.com or tweet to @ColiloquyAimee for an invitation.
Posted by Kira Snyder at 2:47 PM No comments: